Forgive me for the delay of this month’s TCM Top 10. I was celebrating my birthday this weekend and time got away from me. TCM has a stacked September that will hopefully cushion the sting of anticipating Halloween. I tried to pick from all the network’s themes, including another foray into the Treasures of the Disney Vault and their Star of the Month, Jennifer Jones. Feel free to let me know what you will be making time for on TCM this month!

**All times listed as Eastern. TCM can change the schedule at their discretion.** 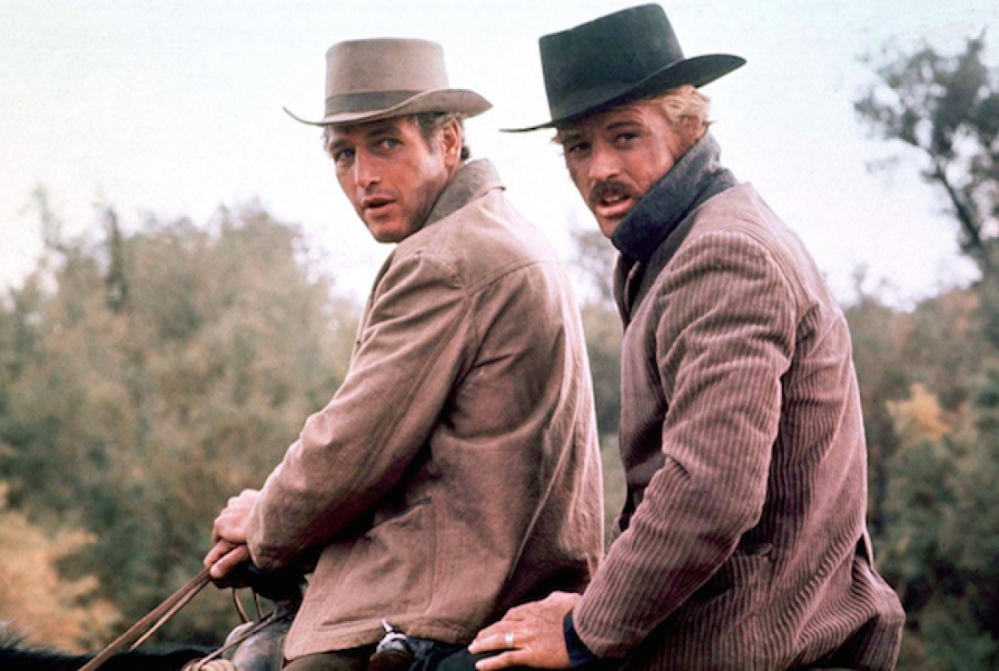 So, you’re probably reading this saying, “Kristen, you don’t watch Westerns.” You’re right, I don’t. However, I do love Robert Redford to bits and I’ve been told he’s never looked better than he does in Butch Cassidy and the Sundance Kid (1969). The film follows the two rascally bank robbers as they nab their illicit gains and, I’m assuming, look fine as hell. I’m not big on Paul Newman, though I know he’s a classic film favorite. For me it’s all about Redford. Meet Butch Cassidy and the Sundance Kid on September 3rd at 8pm.

Referred to more jokingly as “Lust in the Dust,” Duel in the Sun (1947) was sold as a fiery tale of passion that boasts an all-star cast including Jennifer Jones, Gregory Peck and Joseph Cotten to name a few. (Don’t believe me? Look at the rest of the actors on the above poster!) Jones plays a Native American “half breed” torn between Peck and Cotten. This was meant to be David O. Selznick’s 1940s Gone With the Wind but the final attempt was considered lackluster and more interested in sex than telling a good story. Regardless, the film’s infamy is intriguing and I love Jennifer Jones. Catch Duel in the Sun during an evening of Jones’ films, September 6th at 3am.

Post-Funny Girl (1968) Barbra Streisand dabbled in some off-beat projects, a few that have yet to see a proper DVD release. One of these underseen projects whose lack of availability aids in its mystery is 1970’s On a Clear Day You Can See Forever. Directed by the legendary Vincente Minnelli and based on the Broadway show, the film follows a psychiatrist who falls in love with a past life of his patient. So you have wacky 1970s-era looks at psychiatry starring Streisand, who will probably dress up in period clothing yet lack the proper hairstyles of the era. (I’m looking at you The Way We Were [1973]!} The film also stars Yves Montand and has a score by Alan Jay Lerner. Find out why On a Clear Day You Can See Forever, September 7th at 1am.

Despite watching and reviewing every Disney animated film ever made the amount of live-action content I haven’t seen from the studio is staggering, particularly their work from the 1970s. I love the 2003 remake of Freaky Friday, yet I’ve never taken the time to watch its 1976 progenitor starring Barbara Harris and Jodie Foster. My mother has been a Jodie Foster fan since she can remember and demands I rectify this immediately. Like its remake Freaky Friday is a body-swap comedy wherein mother and daughter switch places and realize the grass isn’t always greener. It also stars a post-Addams Family John Astin which is always a treat. I’m not expecting anything more than some fun and whimsy in the way only Disney can deliver. Watch Freaky Friday on Tuesday, September 12th at 2:30am as part of Treasures From the Disney Vault.

September 15th honors actress Carole Lombard and I could have done a list comprised solely of her films. In the end I chose 1936’s The Princess Comes Across. Lombard plays an average Brooklyn girl who pretends to be a princess in order to write her ticket to Hollywood. Who doesn’t believe Lombard could pass for a princess?! The film also stars frequent Lombard co-star Fred MacMurray. The Princess Comes Across on September 15th at 11pm.

Halloween is still a month away but no reason not to get a little horror on this month’s list. The Awakening (1980) is too good to pass up considering it’s an early film directed by Mike Newell of Four Weddings and a Funeral (1994) fame. It stars Charlton Heston as an archaeologist whose daughter becomes possessed by an Egyptian queen. An Egyptian queen possession starring Ben-Hur directed by someone who made a Harry Potter movie?! Sign me up! The Awakening will leave you awake on September 17th at 2:30am.

If I had lived through the late ’60s-early ’70s I’d have definitely been into the music scene. Maybe I’d have even been a hippie because my Spotify is a litany of songs from the era. I recently watched 1970’s Woodstock for the first time and how fortunate that TCM has decided to give me more concert films to consume. Before that epic free concert there was the nonprofit Monterey Pop festival, of which acclaimed documentarian D.A. Pennebaker made a movie in 1969. The film features concert footage from the Mamas and the Papas, Jefferson Airplane and The Who. I’m prepped to dance around my living room and rock out. Monterey Pop airs during a night devoted to the counter culture on September 21st at 8pm.

Time for some noir in there! I’m a fan of twisty stories that take a murder plot and infuse some new monkey wrench into them. Scandal Sheet (1952) is the story of a young reporter who has to solve a murder assigned to him by his editor. The rub? The editor is the one who committed the murder! Why would he so easily put himself in danger? I have no idea so I obviously need to watch the movie to learn more. The film stars Broderick Crawford and Donna Reed, two names I wouldn’t immediately see blended into a noir, enhancing my curiosity. Scandal Sheet airs September 24th at 10am.

I miss the era of murder mysteries that take place on trains! There’s just something special about a group of characters all scheming and hiding things on a tube-shaped conveyance bound to a certain destination. Murder in the Private Car (1934) stars the bubbliest actress out there, Una Merkel, in a story about an heiress on a train where a murder takes place. Mary Carlisle and Charles Ruggles are there so I’m anticipating a small little paperback mystery I can sink my teeth into for an hour or so. Jump into Murder in the Private Car on September 25th at 7:15am.

I’m a literary nut so I watched the original Barretts of Wimpole Street (1934) a few years back. The film starred Norma Shearer as poet Elizabeth Barrett as she struggled to escape the clutches of her maniacal father, played by Charles Laughton. Color me shocked when I discovered that the film was remade in 1957! I’d certainly never heard anyone talk about it. This incarnation stars Jennifer Jones as Browning with the story staying relatively the same. I can’t say Jones fares best in literary adaptations – I’ve seen her in a few. This is really a morbid curiosity thing and the chance to see Jones in some lovely period costumes. Meet The Barretts of Wimpole Street on September 26th at 8pm.

Things get spooky on September 22nd with an evening centered on supernatural comedies. First, Cary Grant and Constance Bennett are screwball spooks trying to help Roland Young embrace life in Topper (1937) at 3pm. Then, Young’s Topper has to find out who murdered Joan Blondell in the quasi-sequel Topper Returns (1941) at 4:45pm. And finally, at 6:30pm, Fredric March gets more than he bargained for with Veronica Lake in I Married a Witch (1942).