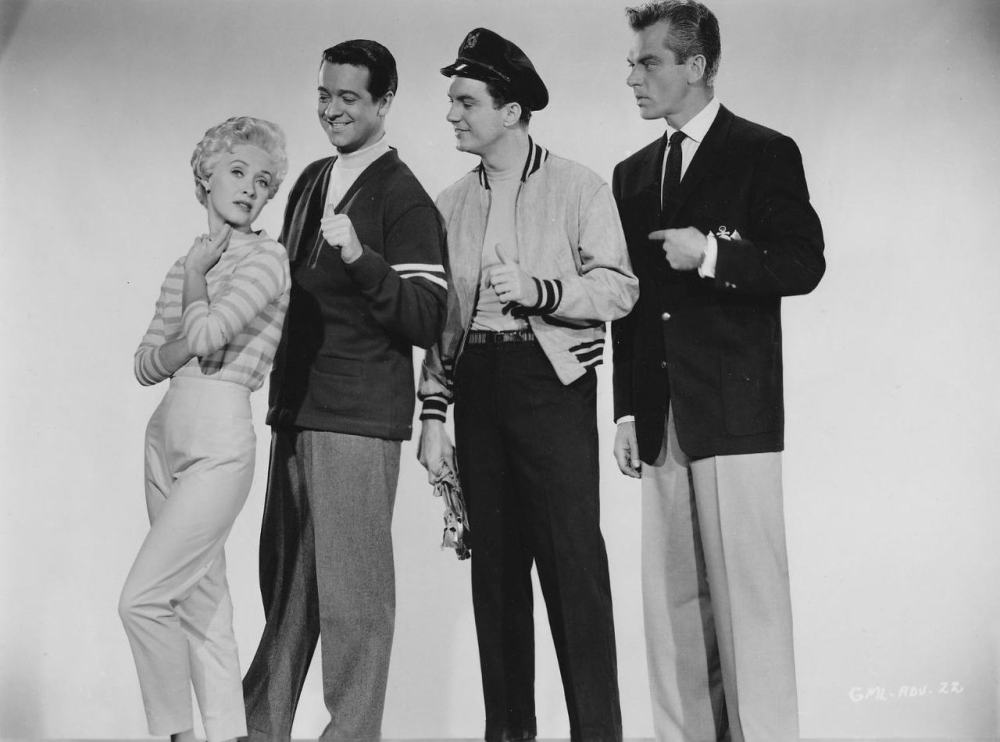 The liminal threshold between the 1950s and 1960s seems as distinct as to be a literal crevasse between the two decades, and the clearest divide comes through in the cinema separating the two eras. Narrative styles, definitions of romance, and gender weren’t just changing and reforming for the new era, but the old guard of the studio and ratings systems were also morphing or crumbling altogether.

RKO’s The Girl Most Likely marked the end of the big studio musicals, as well as the end of RKO studios itself. Filmed in 1956-1957 and released in 1958, and released through Universal on a double bill with Fred MacMurray’s Day of the Badman. A bittersweet highlight includes seeing the famous RKO backlot for the last time; director Mitchell Leisen said a wrecking crew followed him during production, immediately destroying sets after filming was completed.

Jane Powell is The Girl Most Likely, Dodie. Dodie dreams of romance not unlike that seen on-screen. Her current boyfriend is real estate agent Buzz (Tommy Noonan), but there’s no spark between the two. When she meets Pete (Cliff Robertson) there are definitely sparks, but Pete isn’t the wealthy man Dodie wants. Upon meeting wealthy man of her dreams (Keith Andes), Dodie has to decide which of the three men fits her fantasy.

And, boy, do we get to see those fantasies beautifully played out! The legendary Gower Champion worked on the set design and choreography, legitimatizing and rendering Dodie’s fantasies in a way both fantastical and metaphorical. The excellent “Keeping Up With the Joneses” number, performed as Dodie imagines life with Buzz, looks reminiscent of West Side Story with its silhouettes against a blood-red background. The couple scrambles to keep up with the proverbial Joneses, represented by Powell and Noonan dancing and running on a moving platform, before ascending an endless ladder. Powell’s a trouper whose smile never leaves her face in all this exertion, even when the fantasy ends by her falling off said ladder!

Powell’s first song is the melodious “I Don’t Know What I Want,” a song that doesn’t seem to know what it wants in comparison to the film’s look. Like musicals stuck between the hep-cat world of the burgeoning 1960s and the staid 1950s, Powell’s beautiful, near operatic voice gives this an almost Disney-esque, “Once Upon a Dream” level of sweetness and technical proficiency. Her performance of it comes off as much of a fairy tale as the movies she watches, what with the cramped, shabby quarters in which she’s singing this exquisite song of yearning.

The other sequences never really live up to the Joneses song, but they’re all choreographed in the same 1950s style of wide shots and situations where people dancing and singing would look weird, as in the “Balboa” number that looks like it‘s filmed in the same snack shack as Gidget.

The film tells a rather simplistic story of a girl deciding what she wants, but the script and acting creates a romance hearkening back to the studio era, while looking towards the future with a female protagonist figuring out what makes her happy. This is my first experience with Jane Powell, and she makes Dodie a remarkably sweet woman, if a bit contradictory in her characterization. One minute she’s uninterested in going to the local lover’s lane with Buzz – “I just want to talk to you.” “That’s what you always say!” – and the next she’s jumping into the sea to attract the attentions of Pete, who she assumes owns the big yacht in the harbor. Couples meeting and falling in love within a day is ridiculous, but The Girl Most Likely is a fairy-tale, so these quick romances are equated with true love.

Powell and Robertson’s chemistry is the romantic highlight of the feature. The two play off each other’s banter in a way that’s airy and charged with passion. Even though Pete’s not rich, it’s definitely understandable why Dodie would fall in love with him, bum or not. In many ways, Robertson’s Pete anticipates his turn as Kahuna in Gidget (which is just fine with me as Gidget’s one of my favorite films). Like that previous role Robertson plays a guy adrift, uninterested in things like money and a home, but Pete’s more than willing to settle down with Dodie, so long as she isn’t planning big expenditures.

That’s not to say the other two men vying for Dodie’s affections aren’t worthy. Though the audience can easily deduce the “right” man for Dodie, all three have qualities any woman could love. Just a few years after his role as the bespectacled (and besotted) suitor in Gentlemen Prefer Blondes, Tommy Noonan’s Buzz comes off as the oldest of Dodie’s suitors. (Actually, all the character comes off as younger than the actors – all in their 30’s or so – playing them.)

Keith Andes is probably the weakest as Neil Patterson, Jr., the wealthy man of Dodie’s dreams. He arrives with barely 30 minutes in the film to spare, and his role as the ideal makes him inherently boring. Since Dodie’s relationships are far more developed with Robertson and Noonan, Andes’ character comes off like the third wheel he is. The audience is left in severe anticipation at the denouncement, with Dodie proclaiming her love, and wedding, to Neil. The final minute of the film sees things righted, but it is intense for those few minutes!

The Girl Most Likely fills that sweet spot of 1950s true romance with soon-to-be 1960s pizzazz. Jane Powell and Cliff Robertson are the picture perfect couple, and it’s bittersweet knowing this is a time capsule of an era that would soon die. Thankfully Warner Archive’s recent release of this gives us a chance to visit and revisit.

The Girl Most Likely