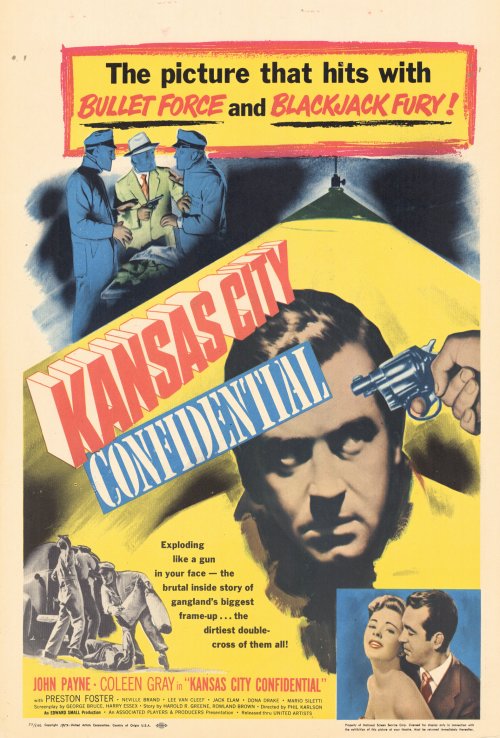 Despite the ingrained conventions of film noir some films can leave you surprised. So it is with director Phil Karlson’s Kansas City Confidential. What starts as a typical heist film becomes a story of duplicity between good guys and bad about the lies we tell ourselves and the lies we tell to spare others. Filled with a delectable assortment of Hollywood’s best bad guys, and good guys who might be more than meets the eye, Film Detective’s latest restoration of this noir gem should be on your radar!

Three men are tasked by the mysterious Mr. Big to rob a bank. Blue collar florist Joe Rolfe (John Payne) ends up as the wrongfully accused and decides to find out who the real culprits are. The trail leads Joe to Mexico where he meets up with the baddies who wronged him, and also finds love with nice girl, Helen (Coleen Gray).

Things get to a cumbersome start with the film’s assumption that audiences can’t interpret the title properly, hence “Kansas City” flashes across the screen after the main titles in case you thought the title was just being cheeky. Fashioning itself as an expose of “the perfect crime” the build-up involves the minutiae of a robbery with Mr. Big keeping track of the bank’s daily schedule – conveniently written out on a set of blueprints which, hopefully, aren’t left out somewhere – and assembling the time that’ll go in and commit the crime.

Kansas City Confidential is a character actors’ delight, with several of the best “that guy’s” opening up into bigger and bolder performances. I can’t recall ever seeing Jack Elam young; much like Walter Brennan he tended to play older men. Elam is the group’s bundle of nerves – chainsmoking and so poor (or resourceful) he lights new cigarettes with the end of the previous one. This nervous demeanor also marks him as the one to “shoot first and think later.” Lee Van Cleef, usually playing the man up to no good in countless Westerns, plays Tony Romano, the  group’s womanizer, while Neville Brand plays cop killer Boyd Kane, a man who “don’t like heroes.”

Each of the three act as levels of confidence Joe Rolfe eventually has to transcend in order to secure who Mr. Big is. On their own, neither of the men knows anything about the other, as Mr. Big’s plan involves masks and no names. Though the audience knows each of the men through their individual introductions, we’re left in suspense watching characters navigate the murky waters, questioning whether the person they’re talking to is in on it. At times Joe’s discovers tend to be more coincidental for narrative purposes – the reveal of Jack Elam’s character Pete to Joe is be more of a lucky break than divine providence.

Preston Foster does some fantastic acting as Tim Foster, despite my initial exclamation of “It’s Walter Brennan.” Sorry, the two look alike. Foster’s the man on the case, hoping to solve the bank heist as a means of getting back on the police force. This seems almost secondary to his other function, that of concerned father. His daughter, played by Coleen Gray, ends up falling for Joe, whom Tim assumes is a thief. Much of their squabbling comes off like two dogs marking a tree, but it all works in the film’s denouement.

Many will recall John Payne as the man helping Natalie Wood believe in Santa Claus in Miracle on 34th Street (1947). Actually, Payne worked in various other genres and his Joe Rolfe is just an all-American boy trying to make good. He’s nothing special – neither financially exceptional nor overly intelligent. He’s Joe America for all intents and purposes. So when he’s accused of being in on the heist, the audience is meant to reflect on how this could be them. Joe’s past has a slight blemish on it, giving the police all the ammunition they need to assume he was the getaway driver. Never mind that some of their logic seems very silly by today’s standard – the cops refuse to entertain the idea that a duplicate truck exists and all Joe gets for being roughed up and falsely accused is a sarcastic apology.

Kansas City Confidential gets interesting when everyone leaves the staid confines of Kansas City. Joe’s travels to Mexico put him on a collision course with the various men he’s seeking vengeance on, and part of the mystery is unraveling who Mr. Big actually is. To divulge anymore of the plot would be spoiling what makes the film so different from most noirs. In a conventional noir greed and lust motivate the characters. Here, there’s much more than that including ambition, hubris, and the powerful aphrodisiac of getting one over on those who’ve wronged you. In the end, Joe Rolfe and the real Mr. Big have far more in common then you’d assume.

And unlike other noirs where the villain is an unseen entity and/or shown their true colors to the audience, there’s genuine sympathy for Mr. Big. He may be a crook, but there’s an inner core of love running through him, leading to the final act where Joe agrees to lie about something, in order to spare those Mr. Big loves eerily reminiscent of The Man Who Shot Liberty Valance (1962).

Film Detective’s latest Blu-ray takes a title that’s been the victim of countless public domain releases and scrubs it clean; everything looks and sounds beautiful.

Kansas City Confidential has some very intriguing plot elements, even if it takes actually leaving the titled town to find them. This an actor’s showcase and Film Detective’s latest Blu is the best way to view it.