The studio era had a way of doing things with genres that weren’t unique but, in execution, make all the difference in the world. Director Henry Koster was adept at star-studded features that would commonly be referred to as “faith-based” today; 1947’s The Bishop’s Wife is his best example. But before Cary Grant and Loretta Young ice-skated Koster put Margaret O’Brien in this patriotic musical whose message of hope and prayer was so desperately needed in the midst of WWII.

Margaret O’Brien plays Mike, a little girl sent by her aunt to live with Mike’s sister, Barbara (June Allyson). Barbara is married to a man named Joe – is there any other during this era? – who is off fighting in the Pacific. Barbara spends her days playing in Jose Iturbi’s demanding orchestra. Barbara and her female comrades must hide Mike from Iturbi, his temperamental guy Friday, Andrews (Jimmy Durante) and their landlord. Complicating things further is the discovery that Barbara is pregnant and a telegram the women desperately want to keep secret from her.

The first of two films O’Brien and director Koster worked on together – the other being my favorite O’Brien movie, 1947’s The Unfinished Dance – Music for Millions combines the nightclub musical that dominated the ’40s with a family feature that holds a patriotic message. O’Brien’s Mike arrives in town to be reunited with her sister who is nursing a love for her overseas husband. We’re never sure why Mike is named Mike. Is it short for something? But there’s no denying how powerful her faith is. When she’s left alone at the train station – O’Brien was legendary in her features for lacking adult supervision – she holds tight to a St. Christopher medal. When Barbara starts to lose faith that Joe is coming home it is Mike who asks her to pray for his return.

Unlike faith-based features of today, there’s no real emphasis on a specific denomination, though you could argue the feature leans Catholic. There’s talk of God but no real deconstruction of the minutiae of Catholicism. It’s inclusive, reminding people to pray in the same vein as keeping a good thought for someone. Mike’s naivety is adorable and simplistic. Mike sees God on the same footing as Santa Claus, but that’s never to diminish God’s impact in her eyes; she just hasn’t had the decades of questioning about religion to complicate things. So when Barbara tells Mike numerous women pray for men who don’t return, Mike precociously says “maybe some men just don’t have anyone to pray for them.” The film’s intention is to keep audiences’ hopeful, a sea of Mikes who could easily become Barbara. The film’s climax is easily deduced considering Barbara’s delicate condition, but the introduction of the telegram in the middle keeps things unpredictable for a fair while. The female cast ties this neatly into the war effort as women were the main demographic going to movies at home. Mike and Barbara create the conflict, but it’s Barbara’s friends in the orchestra who create the narrative music, pun intended. Marsha Hunt is Rosalind, the leader of this merry band of ladies. Like Koster, Hunt was also experienced working opposite O’Brien; the two appeared together in Lost Angel (1943). Hunt’s Rosalind is no-nonsense, aware of Barbara’s love for her husband and terrified that a shock like Joe’s death will cause Barbara to lose the baby. Marie Wilson as Marie is also worthy of praise. Her platinum blonde curls and breathy voice draw comparisons to Judy Holliday. Holliday and Wilson both auditioned for the role of Billie Dawn in 1950’s Born Yesterday; Wilson lost it but would later play the role on stage. As sweet Marie, Wilson has great lines and a humorous subplot with Hugh Herbert as her felonious Uncle Ferdinand.

I’ve documented my admiration for Margaret O’Brien on the site before. As Mike she’s sweet and steadfast. There’s an unintentional comedy in her seriousness, a little adult. When Barbara goes into labor you half expect O’Brien to demand a scalpel or cut the umbilical cord herself. Her ability to cry on cue becomes a taste overbearing in this, maybe because so much of the feature isn’t based on melodrama. As far as Allyson goes, I’m generally not a fan of hers but I liked her performance as Barbara. With the Code in effect it’s amazing how candid the feature is about Barbara’s pregnancy, though the only passage of time is marked by Allyson’s increasingly billowing tops. The weakest link is Jimmy Durante as Andrews. Iturbi gets one good moment of empathy with Allyson, but Durante slams the film to a halt. This could be because every performance of his I’ve seen appears the same, right down to all the songs sounding similar. Every time he showed up I tuned out. 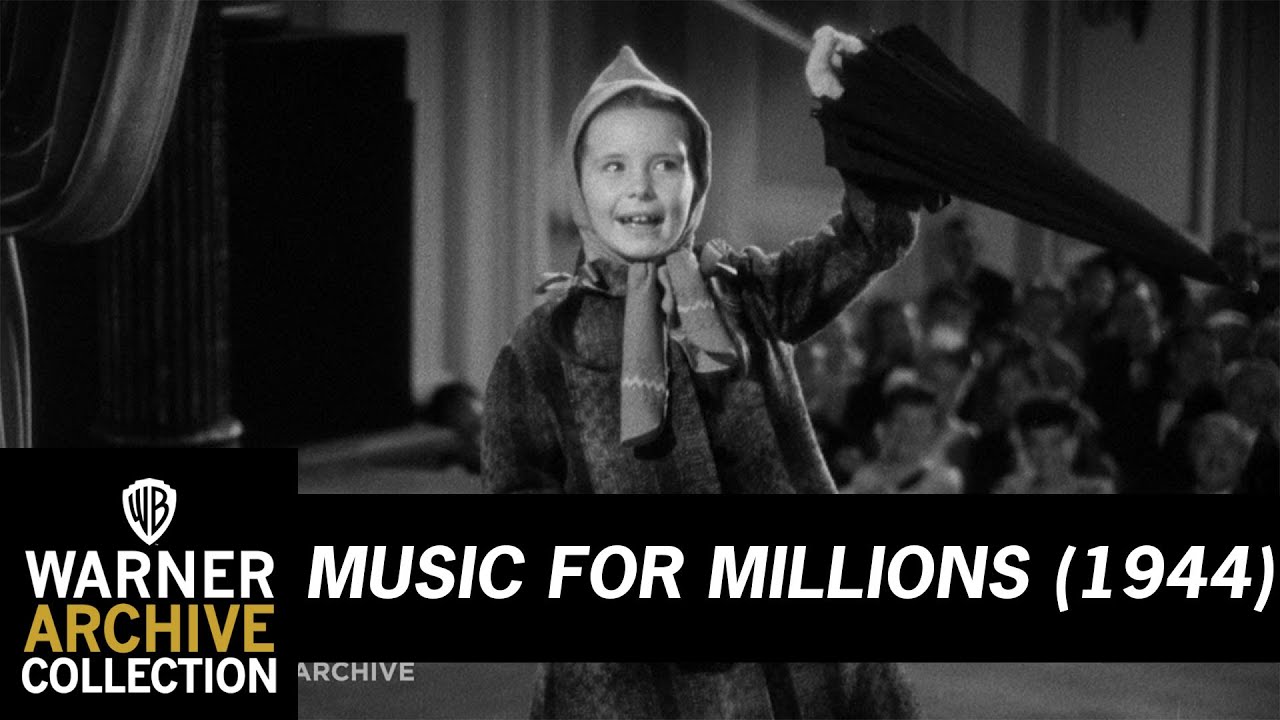 If you’re a fan of O’Brien, Allyson, musicals or just good sentimental dramas Music for Millions is for you.