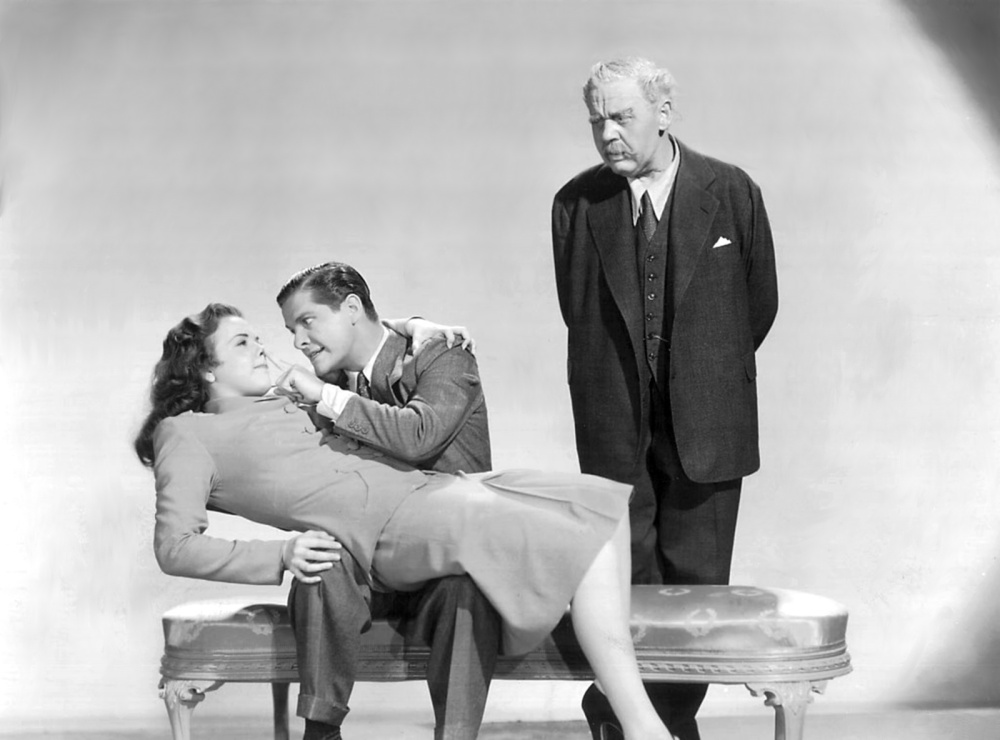 I’ve seen nine of director Henry Koster’s films and it’s safe to say he’s one of my favorite directors. There’s something about his features, whose plots walk on a tightrope between heartwarming and  absurdist, and find a way to bridge the gap. His movies evoke the warmth and fantasy expected from Old Hollywood, while possessing acting performances that contain self-awareness of how insane the whole thing is. I bring all this up to preface my second foray into the world of Universal superstar Deanna Durbin. It Started With Eve is the last feature Durbin and Koster worked on together and if this is the mark of quality for their last pairing, I can only imagine their previous pairings are just as good, if not better. Everything about this is pitch perfect, and then some!

Johnny Reynolds (Robert Cummings) is in a pickle. His father, the wealthy Jonathan Reynolds (Charles Laughton) is dying and his last request is to see the woman his son is going to marry. The problem? Johnny’s real fiancee is unavailable. In a fit of frustration he enlists the help of a lowly hatcheck girl named Anne (Durbin) to make an appearance. But when the old man rallies it’s up to Anne and Johnny to keep the ruse going.

The one genre I don’t feel we see enough of in modern day romantic comedies is the mistaken identity conceit. The last time I remember it being done was in the 1995 Sandra Bullock-starrer, While You Were Sleeping. These types of plots have a foregone conclusion established from jump; you can bet, with 100% certainty, that Anne will become Johnny’s real fiancee by story’s end. So to avoid the audience’s boredom waiting for the inevitable the plot has to be funny with several memorable characters.

The rumors of Jonathan Reynolds’ death have been greatly exaggerated, and much of the humor immediately derives from the group of people anxiously awaiting his demise. Johnny’s real fiancee (played by Talli Wyler herself, Margaret Tallichet) is out purchasing mourning clothes and can’t meet the senior Reynolds; the newspapers are hanging out around his house, waiting for a sign; two men patiently wait in the foray to make the man’s “death mask.”

With a house saturated by death it’s no surprise that the arrival of a pretty young girl infuses life in the old man. And it probably helps that said life manifests in the form of Deanna Durbin. This is only my second time watching Durbin – though I recall enjoying Lady on a Train (1945) a lot – and you can figure out why she saved Universal from bankruptcy. Anne has aspirations of being a singer but has come to the painful realization that in show business it’s not how good you are, it’s who you know. She’s prepped to take the train back home to Shelbyville, Ohio before she’s brought back to the Reynolds abode. She’s a scrappy young woman who knows when to quit, but there’s an inner grace within her that’s evident as she takes the older Reynolds’ hand, a single tear glistening from her eye. Call it sappy but I was ready to eke out some tears.

When Reynolds starts to rally Anne and Johnny are left to figure out what to do. Strangely, the movie does a terrible job of establishing the budding romance between the young pair. Sure, Robert Cummings is good-looking, but he’s more adept at comedy. His facial expressions are priceless, especially his look of exasperation at how Anne is changing the old man. When he starts yelling Anne’s fake name at her it plays like a spasm, enhancing the humor. And Durbin herself is on par with Cummings, comedically. She can throw that same shout back at him and it’s just as funny. There’s also a weird brother/sister dynamic to them, best evidenced in a scene where they chase each other around a room. So by the time they ultimately end up together you can’t say it’s the relationship that makes sense.

Nope, because this is a Henry Koster film there’s always a tinge of weirdness to things and that comes in the relationship between Anne and Jonathan. This is a May-December romance of the most bizarre caliber. Jonathan is resurrected by Anne and her meadowlark ways, evoking more lover for her than his son, who spends the majority of the plot chasing his real fiancee off-screen. When Anne finally realizes the deception is up she tells Jonathan she never wants to see him again, like a lover casting off another to “save” them. And where we never see Johnny and Anne go on a date, Anne and Jonathan do! I doubt anyone would have raised an eyebrow at that at the time…or even now! Their relationship is chaste, to be sure, but it’s more developed than the romantic one between the young duo. Anne and Jonathan even get a chance to do a frisky conga together!

One thing I have to complain about: why is it titled It Started with Eve? I naturally assumed this meant Durbin’s character was named Eve, but she isn’t. Is it a biblical reference?