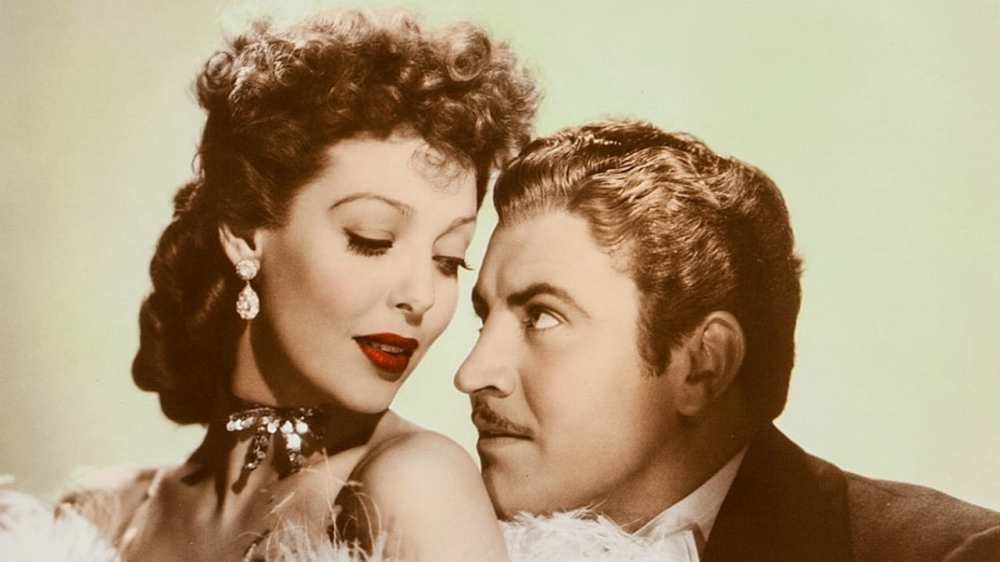 Next month’s centennial celebration star for my TCM Backlot series is Robert Preston, a man I only know for his later work with director Blake Edwards. Preston started out in Cecil B. DeMille films and Westerns, often playing the second banana to a stronger male lead. Or at least that’s what I thought until I saw The Lady From Cheyenne. A Western with a social message, The Lady From Cheyenne boasts the distinction of having a crackling script for 1941 with a progressive point-of-view. It’s so great that it even made me put my Loretta Young antipathy aside!

It’s 1869 in Wyoming and Annie Morgan (Young) has traveled to the small town of Laraville to buy a plot of land and settle. But things take a turn when the evil land owner Jim Cork (Edward Arnold) makes an attempt to buy Annie’s land, and when that doesn’t work he burns down her schoolhouse. Determined to see Cork hang she demands he be arrested and tried by a jury of women – Cork’s ingratiating has turned all the men into his buddies. When Annie learns women can’t serve on juries because they can’t vote she decides to march on Washington and convince Congress to pass women’s suffrage.

The Lady From Cheyenne is directed by prolific director Frank Lloyd, who captures the Western aesthetic with a modern (by 1940s standards) romantic comedy vibe. Much of the bickering between Young’s Annie and her adversary/paramour Steve Lewis (Preston) could draw comparisons to Hepburn and Tracy with cowboy hats. Annie Morgan arrives in Laraville fresh off the train with a sob story about her mother’s death. Young is perfectly suited to the prim and proper Annie, a woman who’s never been kissed and doesn’t want to do much more than find a sense of fairness in the world. Like all solid leading men, Annie wants to rectify an injustice, first the burning of her schoolhouse, then, later, the death of a man shot for using water from her land. Assembling the town’s women Annie takes it into her head to change the laws to help women. And these women are out for blood. There’s a reason their theme song includes lyrics about “hanging Jim Cork to a sour-apple tree.”

What distinguishes The Lady From Cheyenne from other female-led Westerns of its ilk is how positive it is towards women, a fact probably attributed to the writing team of Warren Duff and Kathryn Scola. Released eight months before the U.S. would enter WWII the script seems aware of the contributions that women were making, and also how vital they’d be once war breaks out. Annie is an independent woman from the outset, and though she acknowledges she’s never been interested in politics it’s also because, as a woman, she’s never realized how limited her station is. Young’s demure attitude works perfectly, yet the character is aware of the extent being proper will go. When she first arrives at the Senate house where the men are meeting, they can only pass a resolution to make her wait outside.

As Annie becomes more enmeshed in the world of politics, the script decides to send up the silly notions of limiting women alongside the inefficiency of the government. All the men can decide on is whether to ban smoking during meetings and whether they want desks or not. Their ability to decide can’t extend past lunch, and their reasons for voting are perceived as petty. Jimmy Stewart might have been looking at pork barrel politics but The Lady From Cheyenne is saying “women get the job done better.” In fact, it is only through the unity of women that Annie gets things accomplished. In Laraville the women gravitate towards Annie for her forward-thinking ideas, and once she goes to the local Congress it’s through the aid of several women of ill repute that she can pass her bill. Surprisingly, the painted ladies Annie meets are villains or ditzy dames. They understand how buffoonish men are, and actually show-up the men, many of whom are married, who spend time with them.

And just in case you didn’t think the movie could get anymore progressive, it’s important to point out the vital role of George, played by veteran African-American actor Willie Best. The film doesn’t quite delve into how, by 1869, African-Americans lacked the right to vote, but George is the smartest man Annie encounters. The two are both disenfranchised, though on wildly different levels, and rely on each other. George tells Annie what is happening during the votes, recommends she goes to a ball to campaign, and even describes to her what lobbying is. The relationship is important to show how the vote for women is really a move towards equality for everyone (again, it’s a message that isn’t perfect, but for 1941 it’s amazing to witness). George is a waiter and a valet, but he’s presented as highly intelligent and, like Annie, only limited because the white men in power have deemed they’re less.

This brings us to poor Robert Preston, the villain/love interest of this piece. Preston’s Steve Lewis isn’t unlike his previous turns in the likes of 1939’s Union Pacific or North West Mounted Police (1940). Steve is tasked with seducing Annie so she’ll sell her land to Cork. The two are cute, with a mutual love of poetry. Preston’s certainly suave, able to give Annie her first kiss with flair. Once the two find themselves at odds their ability to undermine each other is funny, from Steve using his smarts to get her bill sent to a different court to Annie learning how to turn both Republicans and Democrats against each other to pass her bill. Much of Steve’s attempts to rattle Annie come from commenting on her appearance. Actually, the funniest joke about this comes from the women Annie rooms with who, when discussing her hat say, “keep the feather and lose the hat.” It’s evident Annie and Steve’s hate masks their insane love for each other, but I wanted Steve to do some groveling. Annie is, after all, quite the politician.

If you immediately think films pre-1970 all have outdated ways of thinking you aren’t watching the right ones. The Lady From Cheyenne is stellar, with a bristling social message that remains relevant to this day. Loretta Young is so great (wow, never thought I’d say that).