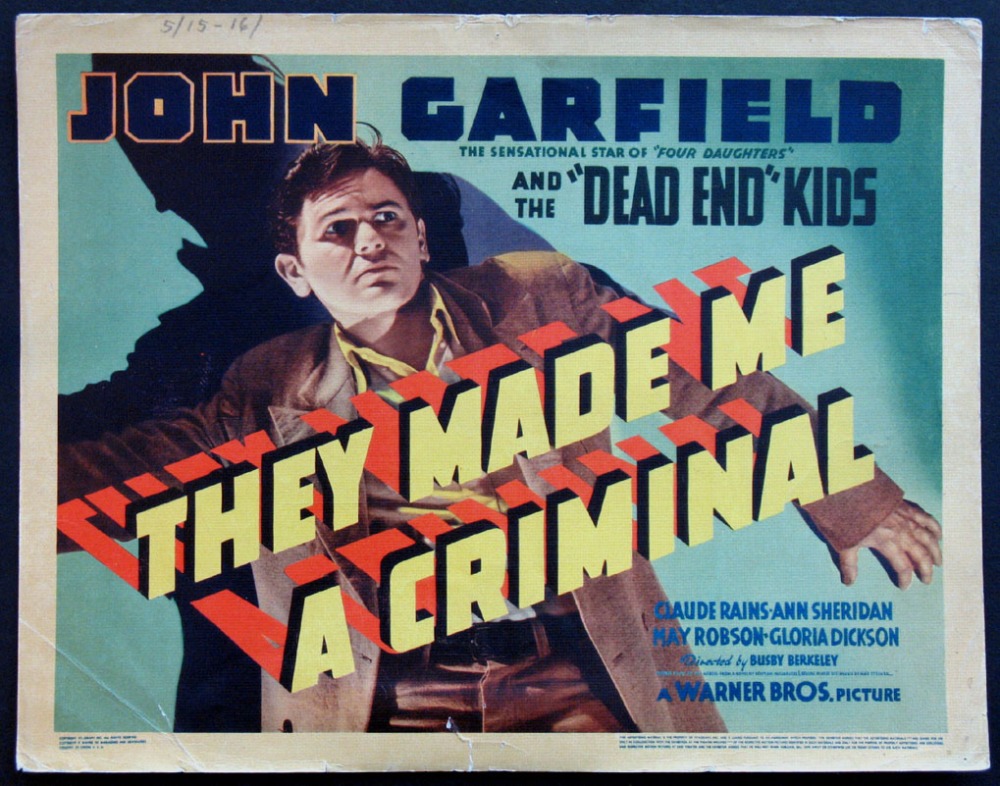 Another Throwback Thirstday devoted to my number one classic film love, John Garfield. I’ve pretty much decided that ’30s Garfield is my favorite, mainly because his cynicism is just adorable to see opposite such sentimentality. (Check out my review of Four Daughters for more on this.) They Made Me a Criminal was Garfield’s second feature after the aforementioned Four Daughters and though he’s the lead this is really a showcase for the “Dead End Kids.” I’m all for child actors, but they don’t really fit well in a movie whose title denotes crime and sordidness. The whole feature has enough corn to fill a popcorn maker. But Garfield spends an inordinate amount of time in this sweaty and shirtless so I can’t write it off completely.

Johnnie Greenfield (Garfield) is a boxer set to go all the way to the top. But when he gets in a fight he passes out only to discover his attacker has ended up dead. Johnnie didn’t do it, of course, but the true perpetrator is dead, leaving Johnnie to start over. He makes his way to Arizona where he ends up on a ranch run by Peggy (Gloria Dickson) and a cadre of delinquent boys (the Dead End Kids). Johnnie sees the ranch as his way to redemption, but he soon draws the attention of the police detective (Claude Rains) on a mission to take him down.

There’s a lot of silliness in the plot of They Made Me a Criminal, much of it forced on the film by the Production Code. A remake of the 1933 drama The Life of Jimmy Dolan, that film benefited from having Jimmy Dolan actually be a murderer, but here the Code wouldn’t allow the audience to root for Garfield’s Johnnie. So instead we get a pretty bizarre turn of events wherein Johnnie gets into a fight only to pass out in the heat of it. The real murderer is his manager Doc (Robert Glecker), who vacillates from a cool, cultured Basil Rathbone-esque figure to gum-chewing villain who has no compunction about stealing Johnnie’s watch and his girl (played by an underutilized Ann Sheridan) in one breath. Adding onto the comedy of oddities with the movie, Sheridan and Glecker’s Doc are just as quickly dispatched via a car chase that sees them blowing up in a fireball that would make Michael Bay proud. I shouldn’t have expected anything less from director Busby Berkeley. Instead of dancing girls in formation we’re getting violent death and massive special effects in 1939.

This leaves poor Johnnie in a pickle because there’s no way to prove his innocence – nor is there anyway to prove his guilt. Where Mickey Borden in Four Daughters thought the world was rotten and out to attack him personally, Garfield’s Johnnie is a bit of an idiot, despite his chronic refrain that he’s “no sucker.” The film doesn’t want you to outright hate Johnnie despite his established penchant for lying to make himself more amenable to the fight crowd; he lies about having a close relationship with his mother to play on sympathies. And yet it is his hotheaded nature that puts him in the situation he’s in. At the same time he openly tells his lawyer about the $10,000 he has in the bank, seeing no problem with giving the man the key to his bank account and believing he’ll get all his money. Oh sweet, simple, stupid Johnnie.

To his credit it’s why I love ’30s Garfield. He’s just so good at playing multiple emotions at one time. One minute he can play an opportunistic flirt, trying to convince good girl Peggy to pull off the side of the road so they can “talk” – the word coming out of his mouth with such a loaded double entendre. The next he can be a little kid, swimming in a water tower with the Dead End kids like he’s 12. Garfield’s expressive eyes, coy smile, the man plays audiences (and me, especially) like a rag doll. And that’s to say nothing of the boxing scenes which show all the power and determination that made Garfield such a compelling actor to watch. You believe he’s taking his lumps. 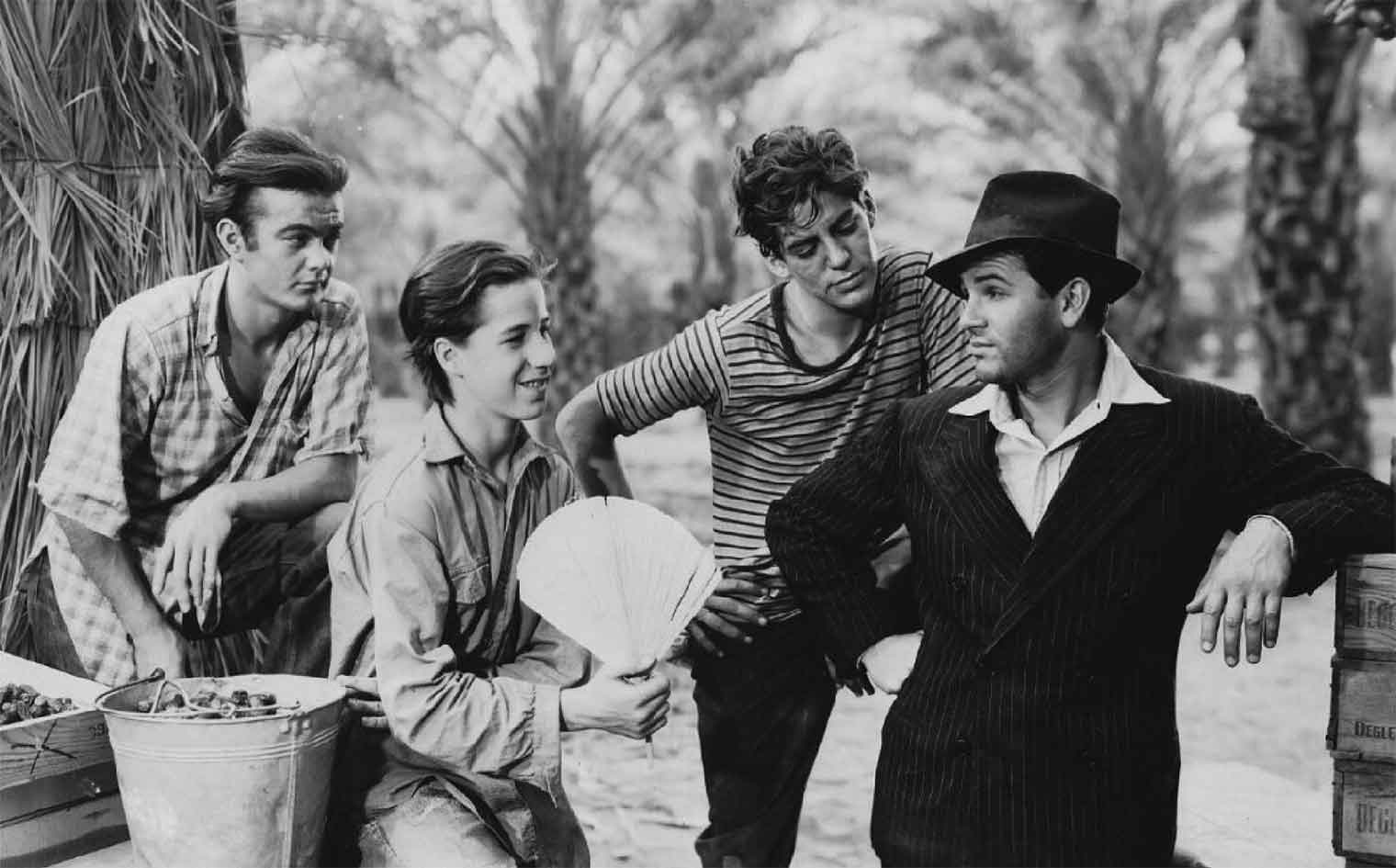 But as good as Garfield is, the movie doesn’t want to focus on just him. He’s the bad boy looking for redemption, and that redemption is found in the domesticity offered by Peggy and the boys on the Rafferty ranch. The problem is everyone is too perfect, too flawless, too bland. Even the supposedly troublesome Dead End Kids have an ersatz air to them, as if their delinquency is little more than a front. The biggest trouble I could see these boys getting into is cheating on a math test. The Life of Jimmy Dolan had Loretta Young in the role of Peggy and it’s understandable why. She’s good-hearted with a feistiness brewing within. Gloria Dickson only made 23 movies before tragically dying in a house fire six years after this. Having not seen her in anything else I don’t want to disparage her here but I’m not understanding her appeal. She’s perfectly passable as the right woman for Johnnie but she’s little more than a beautiful dullard. Priscilla Lane worked in Four Daughters because her happiness was such a marked contrast. Dickson doesn’t have anything written to give her a character, so she’s little more than “the girl.” May Robson’s Grandma is actually a more compelling female character with her dogged love for Johnnie and an inner fight that’s funny to watch.

The third act is a bit of a mess with Claude Rains – who felt he was miscast – returning as the disgraced detective desperate to prove himself. It’s assumed Johnnie will be man enough to go back home and fight the charges against him, walking onto the train with stoicism and dignity. Instead the movie throws its hands in the air with Rains’ Detective Phelan saying adios. Johnnie is left to embrace his new identity. Now, I hate to let real-world issues intrude in movies but how does this benefit Johnnie? I mean, this was 1939 so maybe it was easier to get a new birth certificate and social security card but…why go through all that? I envision a very boring sequel wherein the newly reborn Jack Dawning spends a lot of time in line at DMV.

They Made Me a Criminal is pure pulp but John Garfield is so stinkin’ adorable how can you resist it? The movie is just warm-hearted and fun enough that you can ignore the title totally doesn’t fit it.

2 thoughts on “Throwback Thirstday: They Made Me a Criminal (1939)” Leave a comment ›