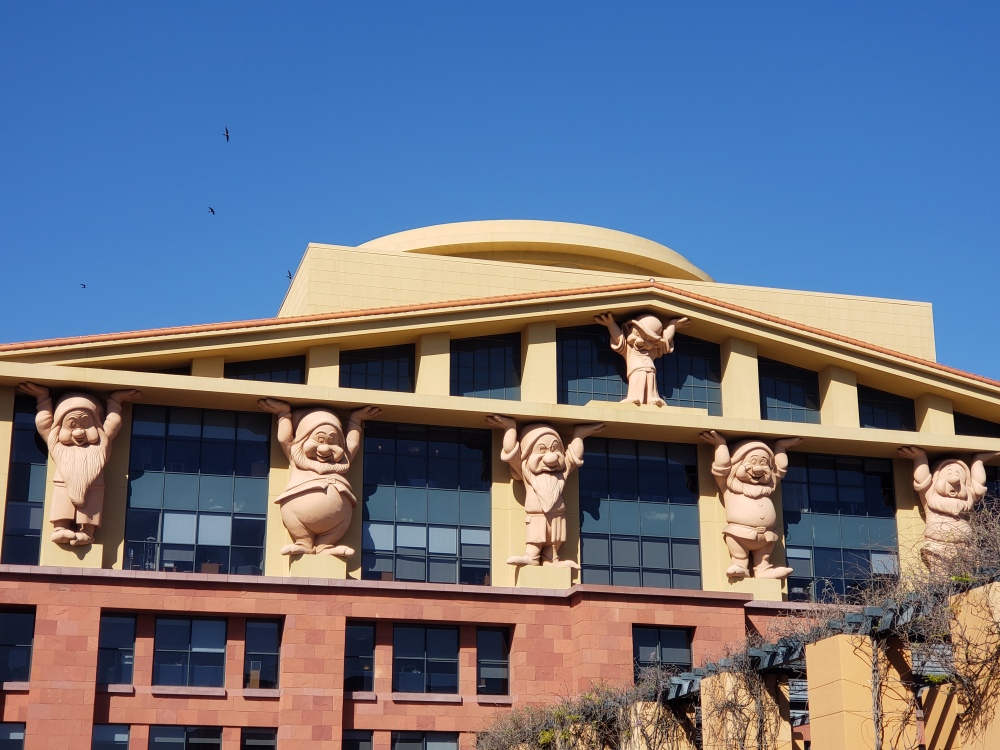 You might remember that one of the first goals I ever set out for this site was to watch and review every single Disney animated feature, which I did (up until Frozen, if memory serves). I’ve always loved Disney despite my constant criticisms of the corporation itself and one of my lifelong dreams has been to set foot on the iconic studio lot where Walt himself crafted so many iconic works. Fortuitously, when I moved to Los Angeles I ended up being about 10 minutes from the location, but if you want to get on the lot you have to know someone who works there or be a member of Disney’s exclusive fan club, D23.

Thanks to my mom I was gifted with a D23 membership two years ago and had quick enough fingers to secure a spot on their monthly Walt Disney Studios tour. I was FINALLY going to be hang out where Walt and his Nine Old Men worked on Cinderella (1950), and where the fantastic animators created my favorite Disney feature, The Little Mermaid (1989). These tours are pretty small, no more than ten members were in one group and our guide Alana was fantastic! I’ve taken Disney’s in-park tours, like A Walk in Walt’s Footsteps, and was bored by the canned information and general attempt to sell the experience as opposed to the history. Not so here! Alana knew incredibly detailed information on the studio, right down to pointing out fun bits of info based on small items she liked. And if she didn’t have an answer she was committed to asking someone who would.

The Walt Disney Studios themselves are massive, with one of the largest soundstages on the West Coast (Stage 2). Stages 1 is dedicated to Mousketeer Annette Funicello while Stage 2 honors Julie Andrews as it was the location where she filmed Mary Poppins (1964). We weren’t able to go into the stages themselves, but just seeing how large they are is insane. In fact, Alana pointed out Stage 2 is where the Mark Twain Riverboat was actually built, disassembled, and then reassembled in Disneyland itself. It’s a soundstage big enough to build a riverboat, people! We hit all the cursory buildings in the area, including the famous water town, and where the digital effects teams are holed up. Unfortunately we weren’t able to go into any of these places, but hearing the history of these locations was enough. The studios themselves are beautifully manicured and while celebrity sightings aren’t expected, Alana said they do happen as the studio does film several ABC shows.

After seeing several buildings with prominent history we actually went into a location where all the history is stored…or at least a portion of it. If for no other reason I stress visiting the Walt Disney Studios lot purely to check out the archives. As Alana laid out, Disney is the only movie studio that documents and retains nearly everything associated with them and makes it available to researchers or employees (guess I should write a Disney book on something!). It’s sad that Disney’s head archivist, Dave Smith, passed about a month ago because he really made the archives the dream of every Disney fan out there. Before you enter the archives there’s a great series of displays in the main building. Currently there’s a 50th anniversary tribute to the Haunted Mansion and they have an original Bride animatronic! You can also see a fun tribute to the various Mickey Mouse costume characters at all the Disney parks in honor of the Mouse’s 90th anniversary. Suffice it to say, some of those early costumes were nightmare fuel.

But, to the archives! The minute I walked through the door and saw the Redhead animatronic from Pirates of the Caribbean, I was in love! If the world ended tomorrow, the archive room would be the place I’d spend my days. In just a small room is a dearth of Disney history, and it’s really just a fraction of the 5 million items Disney has in storage lockers throughout Southern California. We only got to spend about 15 minutes in this room and I feverishly consumed everything I could. Since Pirates has been changed the room doesn’t just include the Redhead but the original bride auction banner; items from the original Twilight Zone Tower of Terror (which pleased both the Disney and Twilight Zone fan in me); several Tiki Room items. What took my breath away, though, were all the books. Every book on animation, the Disney company, Walt himself, is packed into bookshelves. There are even huge binders holding just photos of Disney and the parks. Seriously, let me sit at a table and just read every book in there and I’ll be happy! We also got to see and hold Walt’s Oscar for his 1958 True Life Adventure, White Wilderness.

After bidding adieu to the archives – seriously, leave me here! – we made our way to Walt’s office. Walt’s office goes hand-in-hand with the archives since it was Dave Smith who went into the Big Cheese’s office after Walt died and took photos of everything, hoping to retain a memory of it for future use. Within the last two months the office has become a tour stop with everything either being an original piece of Walt’s furniture or a replica. We saw both Walt’s formal office, which you can see recreated in the 2013 Disney feature Saving Mr. Banks, and his private office. Seeing the two facets of his personality – the side he showed to VIPs and the side he showed when he wanted to relax – is stark. It’s amazing how accurately the office was recreated, right down to drycleaning the original curtains that hung in Walt’s office in 1966; they were so smoky they had to be severely cleaned. Alana pointed out a ton of amazing items in just this space alone and it’s like stepping into a time capsule. The Kem Weber-designed airline chairs are fantastic if for nothing more than they apparently fetch a hefty price at auction. We also got to see a replica of an animator’s studio from that time, though you aren’t allowed to walk through it like the offices. 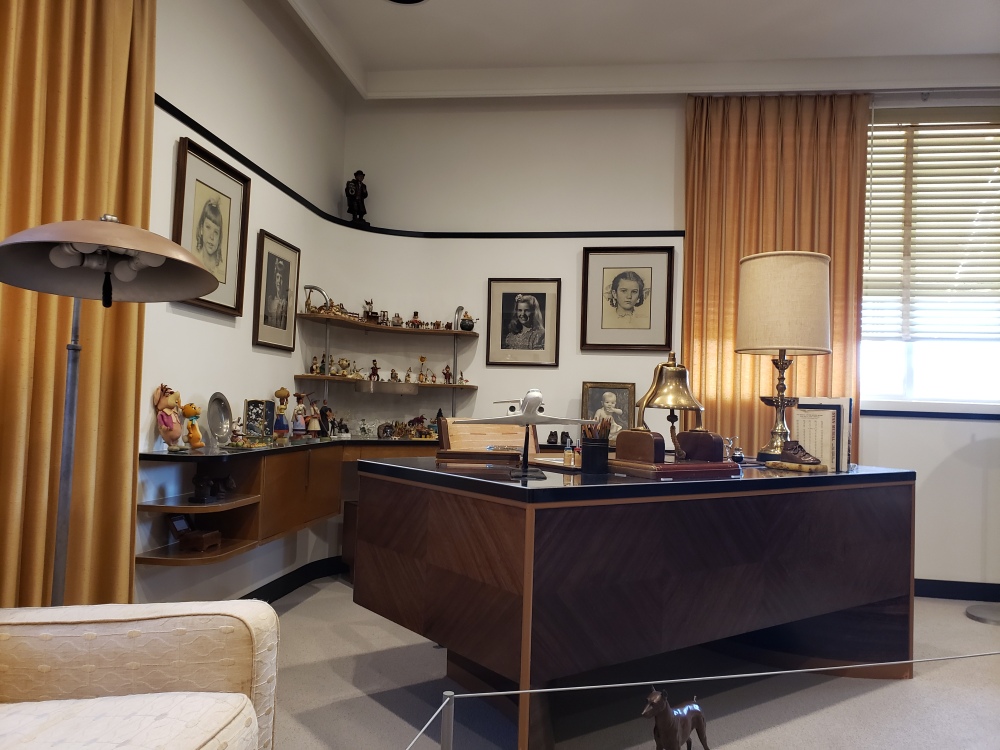 From there we took a deep dive through the ink & paint department, looking at every stage of production required to craft an animated film (much of which is now irrelevant with the rise of CGI). We saw a bevy of beautiful artwork, though you are stuck in a string of hallways with people coming and going to work. We also took a stop into Disney’s underground tunnels, Utilidors for those who live in Disney World. These areas don’t have the wow factor of the Archives or Walt’s office, mainly because you’re staring at artwork and/or aren’t allowed to wander. Thankfully, Alana kept things moving and was able to make everything feel conversational; she wasn’t reading from a script, folks. 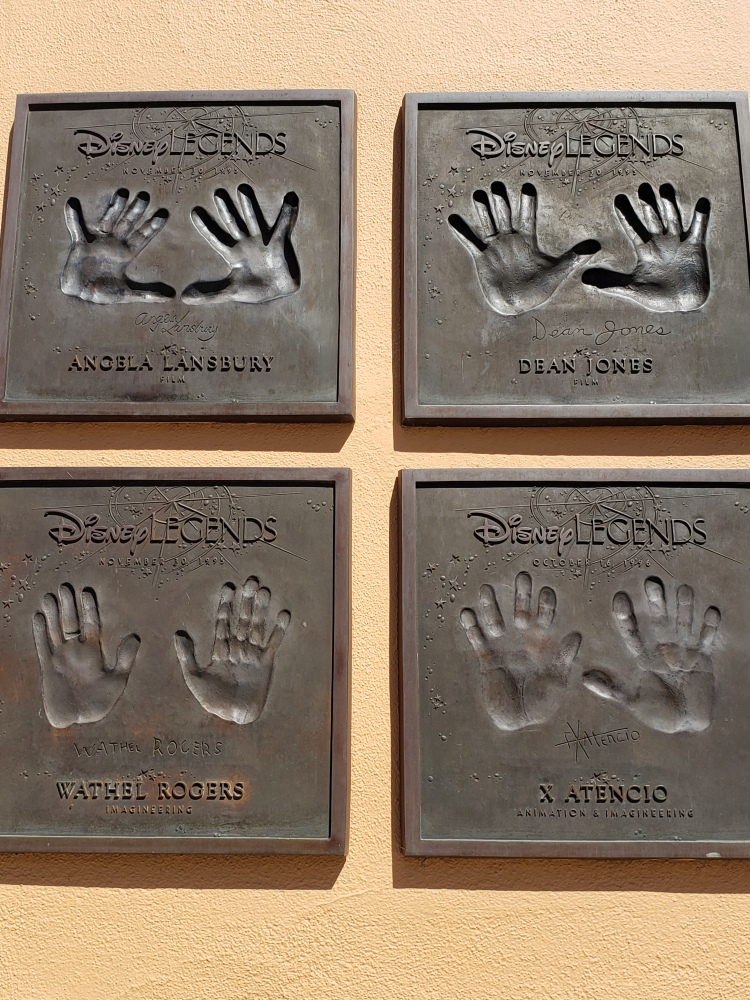 The tour ends at the Disney Legends Plaza, the studios’ equivalent to the Walk of Fame. Next to the Archives I could have spent time just running from handprint to handprint. It wasn’t enough to see the handprints of Walt’s Nine Old Men; I was more surprised by how many classic film stars are represented. Several of them, unfortunately, aren’t represented via handprints because they passed. Instead they’re memorialized with plaques, but there were still plenty of names to see: original Snow White voice artist Adriana Caselotti, Haley Mills (her hands and mine are the same size!), Fred MacMurray, and David Tomlinson are just a few I caught. You can also take some fantastic photos of the main studio building which has the Seven Dwarfs acting as pillars. Not sure how I feel about that. As someone who lives nearby I can say this area looks beautiful at night. (Night tours are presumably offered and I’ll be keeping an eye out!) You aren’t allowed to hang out on the lot after your tour, but you can shop in the employee store – which actually has items not available anywhere else – or have lunch in the commissary if you’d like.

I love Disney so maybe I’m wearing rose-colored glasses but I was so in love! The studios are everything I imagined and more. If you’re a fan and want to see the archives then you HAVE to find a way to visit. D23 members can enter to win these contests every month and it’s worth the stress. The guides know their stuff and craft a wonderful environment. This is the ultimate tour for Disney nerds.