I grouse a lot about the state of classic cinema access and how so much depends on the belief that movies have to make money. But then you look at what Warner Archive puts out and have to pat them on the back. Any other studio would have kept You for Me in a vault for all eternity. It’s not that this Peter Lawford-starring movie from the 1950s is bad. It’s that it’s a Peter Lawford-starring movie from the 1950s. Lawford never really became an A-list star on his own and often did his strongest work against bigger leading ladies which didn’t make him too happy. You for Me is a bizarre little rom-com that has both the “rom” and the “com” in so many different places that it becomes unintentionally funny because of it.

In a moment that serves as opening credits but could have easily closed the movie, we’re introduced to wealthy playboy Tony Brown (Lawford) as he’s shot in the backside by a friend while hunting. Tony goes to the local hospital where he insults the staff who just as quickly insult him. The problem is Tony is the only one giving massive endowments to the hospital, so when nurse Katie McDermad (Jane Greer) gets uppity at him she’s blamed for everything and fired. But doctor Jeff Chadwick (Gig Young) wants that endowment to continue his research – something involving monkeys – so forces Katie to become a honeypot, enticing Tony to donate to the hospital again.

Let’s state the obvious: these characters are all equally terrible people and deserve all the misfortune they get in the film’s scant 70-minute runtime. Peter Lawford always tended to play playboys or other entitled characters and Tony Brown is no different. After taking a round of buckshot in the bum he proceeds to act like the patient from hell, squirming all around (during surgery, no less) and openly berating the people who, supposedly, carry his life in their hands. At the same time, Greer’s Katie has no compunction with openly criticizing a patient (during surgery, no less) yet is surprised that she’s fired for her actions. Add in Gig Young’s Stereotypical Movie Doctor who forcibly tells Katie to prostitute herself to Tony and you have quite the movie.

You for Me has an interesting history. It was only the second credit for screenwriter William Roberts, who would go on to write the scripts for 1959’s The Mating Game with Debbie Reynolds and was the uncredited screenwriter on 1962’s Ride the High Country. He was the creator of the television staple The Donna Reed Show and was an action screenwriter in the ’70s. Director Don Weis was primarily a television director, though his biggest film claim was 1953’s The Affairs of Dobie Gillis. After this he’d reteam with Lawford, directing several episodes of the actor’s television adaptation of The Thin Man. Lawford and Greer were each on the downhill skids of their respective careers despite having hits only a few years before; Lawford had just had a supporting role in 1951’s Royal Wedding while Greer was still struggling as a noir actress, recently reteaming with Robert Mitchum on The Big Steal (1949). The same year this was released she’d star in the remake of The Prisoner of Zenda. 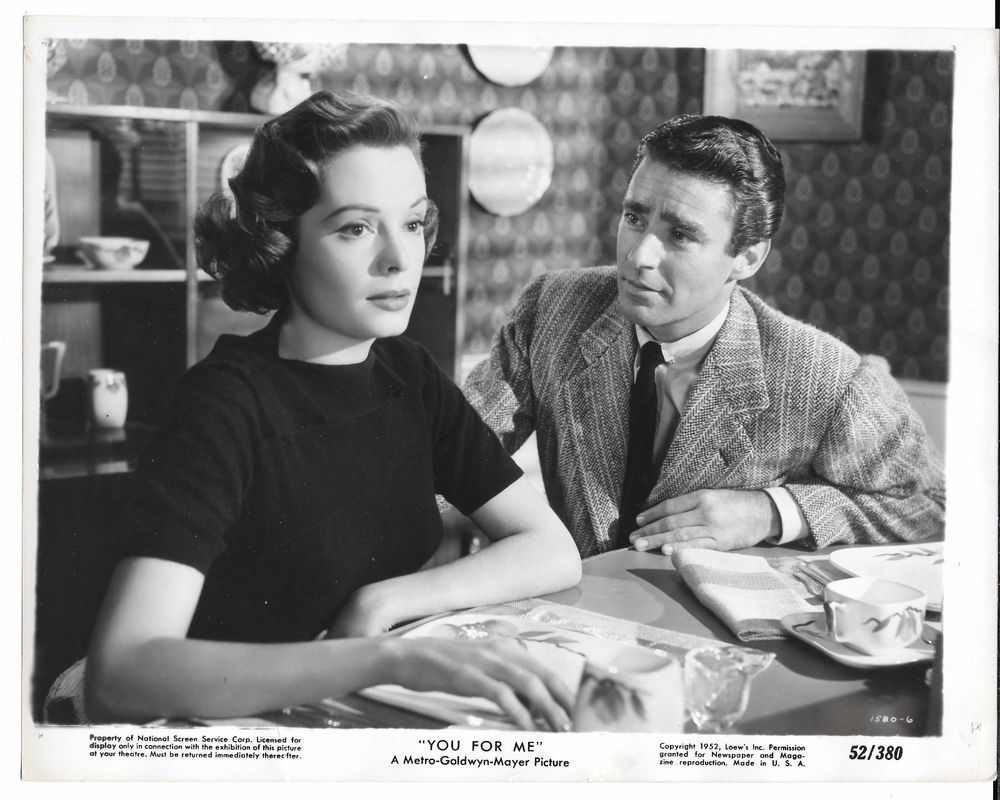 So much of this explains the flaws within You for Me. This was never meant to be anything more than a programmer, a means of putting two supporting players together to see if they could hold a film on their own. The loss to the studio of $38 million indicates otherwise. It’s a shame, too, because Jane Greer walks away with this film and had it been a straightforward rom-com, free of the juvenile television shenanigans, her and Lawford could make it work. Most known Greer for playing the femme fatale in Out of the Past (1947) and as Katie she’s more of a straight arrow. Katie appears to be smarter than the actual doctors around her, at one point openly agreeing to assist on a newborn tracheotomy, yet is constantly looked at as little more than a sex object. Her chemistry with Lawford burns far brighter than it does with Gig Young’s Jeff, and a scene of her getting soused with Lawford is darling; her facial expressions are perfect!

As for Peter Lawford, I tend to give him the benefit of the doubt in everything. I love him to bits. Tony Brown is a total Peter Lawford character and so he plays the role well. He’s suave, a bit old-fashioned, highly darling. The movie also has a serious infatuation with his backside, at one point having doctors come from all around to take a look at it. It is weird that he doesn’t get the girl in the end considering he’s credited above everyone, even Greer! Gig Young plays what effectively is a Wendell Corey role in any other movie, and that’s to say he’s incredibly dry. Young’s character is also highly petty, at one point quitting his job because Katie won’t be with him. (That’s what happens when you tell a woman to go out with another man…she might not like you after all.)

You for Me is all kinds of weird but I thank Warner Archive for putting it out; I wouldn’t have watched it otherwise. Peter Lawford and Jane Greer keep the film afloat despite how sitcom-y it is. Even its runtime seems to imply it was always suited for the small screen. If you’re a fan of the two performers this is a fun diversion, though not representative of either’s best work.