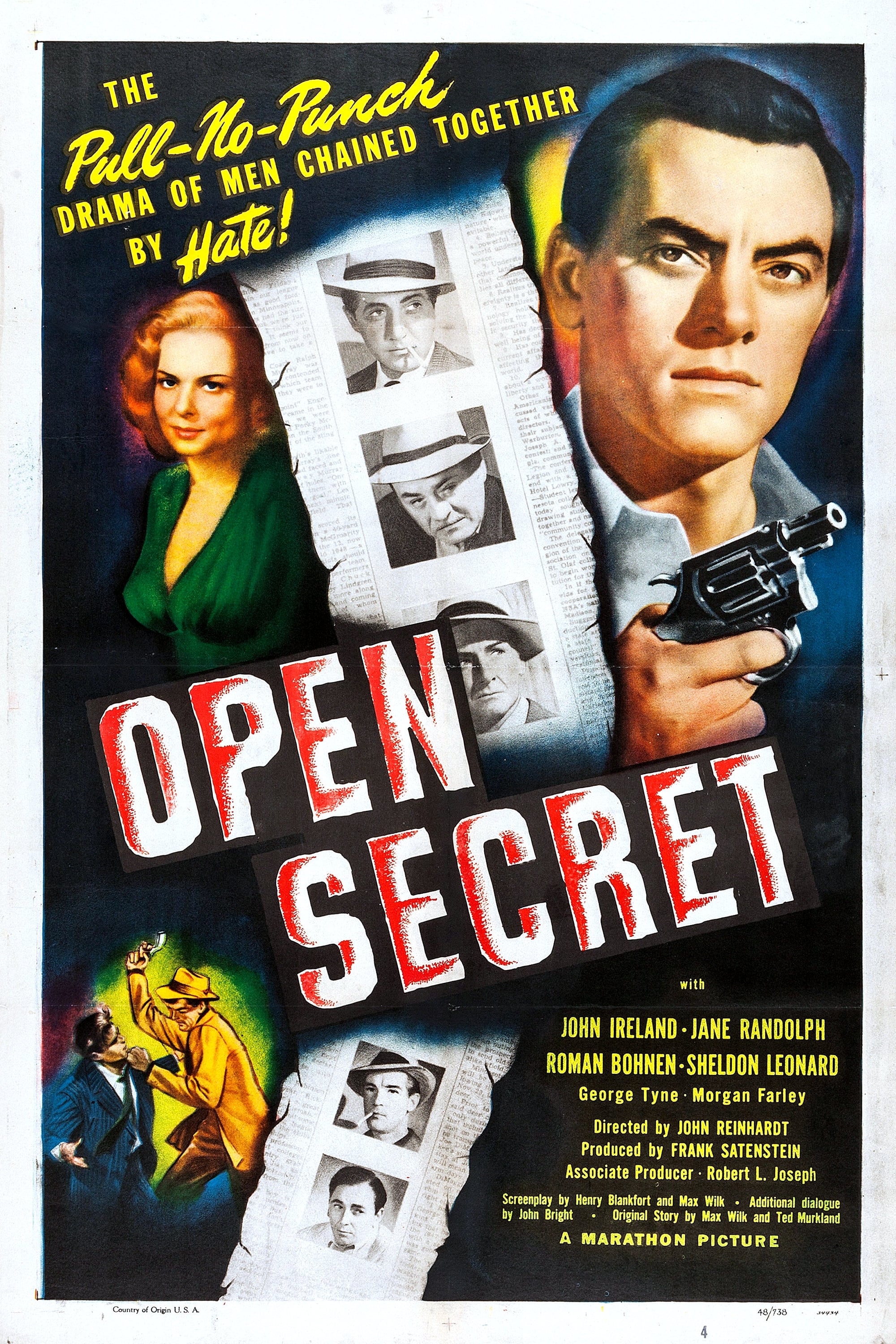 In 1947 the feature Crossfire took a harsh look at the rise of antisemitism in America, taking an story that examination homosexuality initially and presenting it to post-war audiences as a reminder of what they had recently fought a world war for. It was a beautifully glossy production where good triumphed over evil. A year later, the small production company Eagle-Lion (a studio known for putting out the B-movies that made B-movies look good, according to Eddie Muller) came out with Open Secret, a film utterly unrelenting in its exploration of Nazism and hatred in America. It’s eerie how timely this movie is despite its low-budget and non A-list cast. A few years later John Sturges would do his own take on this with Bad Day at Black Rock (1955) but Open Secret is a harsh and bitter tale that America is far from perfect.

Paul and his new wife, Nancy (John Ireland and Jane Randolph, respectively), are visiting a friend on their honeymoon. But when the friend disappears it’s discovered he’s been murdered. Soon Paul and Nancy find themselves in the middle of a town whose hatred for Jews and foreigners has turned into murder.

A movie about a town using patriotism to justify the killing of people different from them? Are we sure we’re not watching the nightly news? What makes Open Secret so surprising is that it’s not surprising in the world we live in today. Hearing the head baddie tell the beautiful Nancy that “foreigners” are at the root of all the problems is a sentiment being trotted out today, and yet this was in 1948! Screenwriters Henry Blankfort and Max Wilk imply that despite the end of the war, there’s still a grassroots hatred of Jews, Germans, and anyone whose blood doesn’t bleed red, white, and blue. As Paul discovers, these men (and they’re all white males leading this hit squad) have no compunction with orphaning a local family and generally leaving the city in a state of terror. The mystery at its center involves stolen photos and the unveiling of this 1940s brand of homegrown Nazis.

As Muller laid out in his intro during the film’s screening at TCM, director John Reinhardt was a director well-versed in B-movies. Open Secret certainly suffers from its lack of budget, with a cheap studio set standing in for the dark streets of this small-town. Actually, what keeps the movie is fascinating is how it ironically presents this place as small-town America yet it’s constantly filled like a shadowy noir. The dark set being equated to the dark hearts of the citizenry, perhaps? Paul and Nancy are our protagonists, yet the movie presents them as having no political agenda or, really, any personality. They’re John and Joan Q. Public, their opinions of people unformed prior to them being dumped in the middle of this morass. John Ireland is a decent leading man though it’s easy to see why he was never a big name. He’s fairly one-note and vanilla, complemented by Jane Randolph, herself best known for playing the girl next door/quasi-villain depending on your reading in Cat People (1942). They’re not supposed to aim for an Oscar, but a modern-day (at the time) all-American couple.

It’s amazing that in the ’50s, with the arrival of HUAC, that Bad Day at Black Rock would cover similar territory as this, possibly because Eagle Lion was such a small studio. Like this film that feature also dealt with a man coming into a town that held secrets regarding its treatment of foreigners. Maybe because this film was stripped of the trappings of a Hollywood studio it’s grimmer in its presentations, particularly because the baddies are all nondescript men. The old “they look just like us” game.

Open Secret is an uncompromising look at hatred and prejudice in American that, sadly, retains its timeliness today. Despite the shaky production values this is a gem that deserves rediscovery.