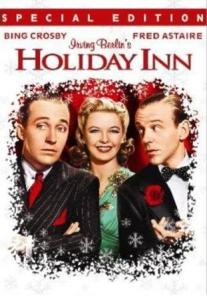 Tonight’s 25 Days of Christmas film appears on many “Best Of Christmas” lists and I figured I’d give it a look. It’s one of two classic Bing Crosby films I have and if my thoughts on Holiday Inn are any indication…let’s just say it might be a wee bit difficult to get through the second film.  Anyway, this entry concerns the 1942 Bing Crosby/Fred Astaire film Holiday Inn (the movie inspiring the chain of hotels which host proms, one night stands and the like).  The movie is okay but I just couldn’t get away from the mean-spirited antics of our two male leads, all because of a bromance that dare not speak its name.

Jim Hardy (Bing Crosby) is a songwriter who wants to escape to a small farm in Connecticut.  After losing his girl to best-friend/hoofer Ted Hanover (Fred Astaire), Jim gets the idea to run a hotel only open on the holidays, which he names Holiday Inn.  Once there, he also discovers the beautiful Linda Mason (Marjorie Reynolds) who he quickly falls in love with.  When Ted loses his dance partner/lover he goes to Holiday Inn, only to want Linda for himself. 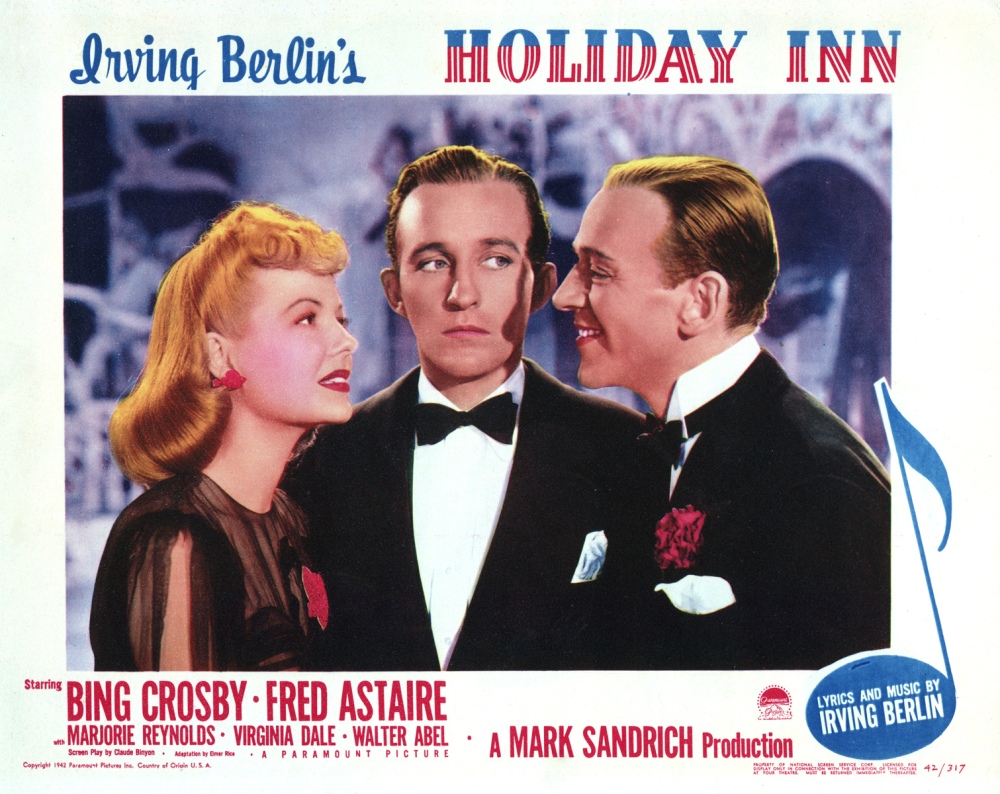 This Irving Berlin movie is the reason why we have the song “White Christmas,” so if anything you get to enjoy that classic holiday tune sung as only Crosby can sing it.  Crosby has a phenomenal voice, and if I didn’t hear so much Hollywood gossip about what a horrible person he was, I’d have been blown away.  He’s good as the poor sap who constantly loses the girl, but he really doesn’t help matters.  He has decent chemistry with Reynolds, but watching his constant tug-of-war for her heart between him and Hanover gets a bit irksome.  Astaire comes off as the villain of the story, the charming hoofer who steals what he wants and moves on.  You see him steal away Jim’s first love Lila (Virginia Dale) who eventually leaves him, forcing him to move on to the next girl Jim sets his sights on; as soon as Jim gets a shiny new toy, Ted wants it for himself.  Reynolds is stuck in the middle as Linda, the sweet, simple girl with little depth or personality.  Sure, she gets to sing with Crosby and has a story arc which sees her become a big star, but she’s as bland as a vanilla milkshake.  She’s only defined in terms of how the men perceive her (Jim sees her as beautiful while Ted sees star potential).  We learn nothing of her personal life beyond the fact she once worked at a flower shop.  When Jim keeps her away from a Hollywood audition she gets indignant telling him he didn’t let her have a choice, but this is a girl who is asked to be his dance partner and says “Well, I guess this means we’re engaged!”  Wait, how did you get a marriage proposal out of a business deal?

As you can see, the big problem with Holiday Inn is the love triangle.  Jim and Ted treat Linda like the cookie they both want.  As soon as she’s introduced the two are constantly sparring for her attention.  Jim is just ridiculous, constantly hiding Linda from Ted and even going as far as to have a driver take her around town so she’ll miss an audition culminating with Linda getting dumped in the lake.  The only person who loses out is Linda.  She loses job opportunities and is a pawn between two men.  The script never gives her anything to do except be the girlfriend.  It doesn’t help matters Reynolds was in the atrocious Hometown Story which I did as part of my Month With Marilyn and she played a similar doormat figure in that, as well.

The singing and dancing are second to none so the movie isn’t a total loss.  Astaire is a hell of a dancer (although my heart belongs to Gene Kelly), and some of the dance sequences are fun although confusing in parts.  There’s a Washington’s birthday song performed with the cast in Marie Antoinette wear…don’t ask me how those two go hand-in-hand.  And yes, since it’s a 1940s film it wouldn’t be complete without a minstrel show number; this one, sung to celebrate Abraham Lincoln’s birthday, is pretty racist and I’ve seen Birth of a Nation.  During the sequence, Linda is in full blackface and a ridiculous wig filled with braids and knots.  Cut to Jim’s maid Mamie (Louise Beavers) singing to her kids about “When black folks lived in slavery, who was it set the darkey free?”  I know it was okay for 1942 but it’s pretty shocking today, and just seems out-of-place in the story to begin with.  Suffice it to say you don’t want to sing it around the piano.

The movie is a classic Christmas film, so maybe there’s something I’m missing.  Maybe the other Bing Crosby Christmas film, White Christmas, is better.  Either way I was bored with Holiday Inn.  The love triangle is ridiculous, the songs are just off, and poor Linda is a character in name only.  And the slight dash of racism makes it an even more bitter pill to swallow.