Being on the brink of nuclear war is a niche our country has occupied as long as I’ve been alive. In the late ’70s though the concept felt all too real as nuclear warheads proliferated other countries and the Cold War lumbered to life. But with our eyes trained firmly across the ocean, a grander nuclear threat was simmering right under our noses. In 1979 The China Syndrome arrived in theaters, presenting a situation that, for many, still felt like a fantasy scenario. Twelve days later the nuclear reactor meltdown on Three Mile Island brought the film’s fantasy into the cold light of reality and things were never the same. The China Syndrome’s history is one of the reasons its remained in the public consciousness for nearly forty years. The film itself remains a taut, searing look at the horrors of nuclear power that owes a debt of gratitude to Network.

A local news team bears witness to a potential disaster scenario in a nuclear power plant. As they try to learn more about just what happened they’re threatened with a cover-up and the potential for greater, worldwide disaster. 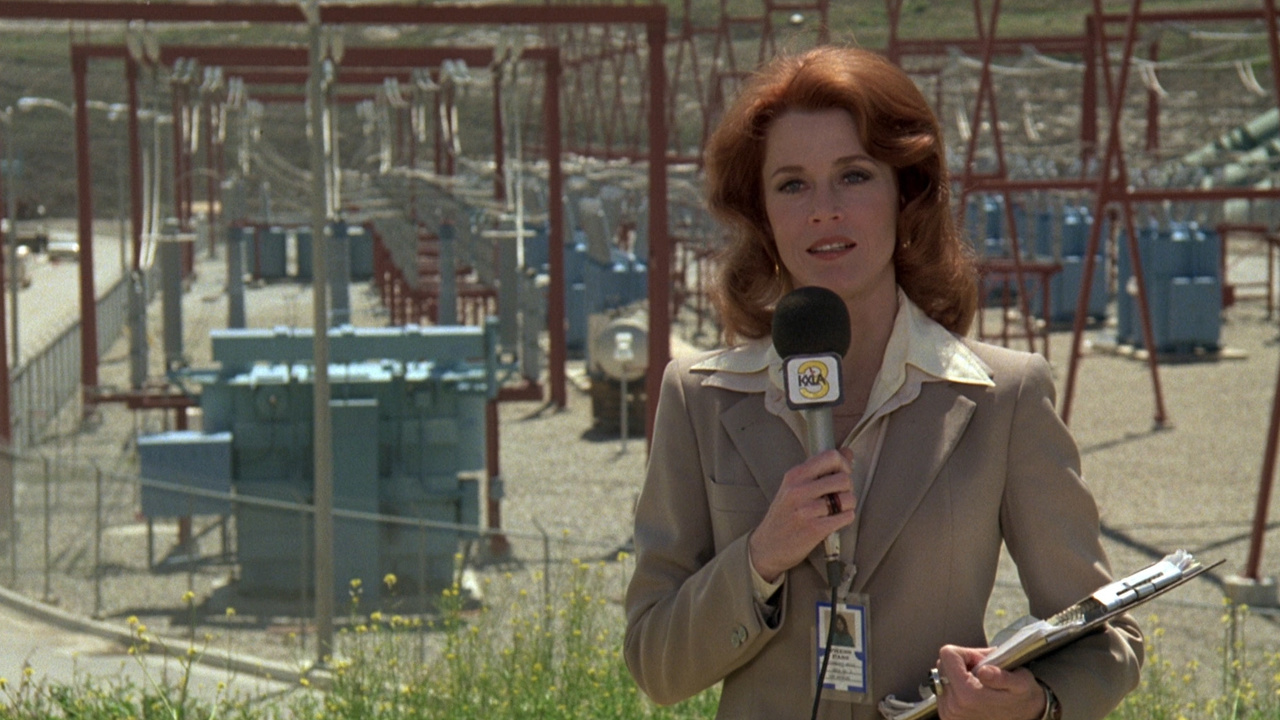 The China Syndrome is both an interesting time capsule and prescient political indictment. In our current political world it’s almost quaint to hear about a movie detailing the fears of homegrown nuclear power and the reactors that continuously suffer from lack of maintenance. Or it would be if that’s not still a problem today (watch the terrifying documentary Indian Point). However, in 1979 most people had no idea about the issues plaguing these giant reactors that could cause untold destruction with a simple malfunction. (The title itself derives from the belief that if the core of the reactor were to be exposed it would burn a hole straight down to China.) As Michael Douglas explained in a talk preceding a screening of the film at the TCM Classic Film Festival, a massive smear campaign against the film was carried out by several large companies that benefited from nuclear power. The China Syndrome was a film no one wanted made and that no one thought was necessary. I mean, what were the odds that one of these plants would have an issue? Cue Three Mile Island and, seven years later, the disaster at Chernobyl. Even today the fallout from the Fukushima power plant is being discussed, with many saying we haven’t begun to feel the full effect.

With a tone similar to All The President’s Men and Network (both 1976), The China Syndrome is a crime procedural mixed with a social message. Our merry band of detectives consists of reporter Kimberly Wells (Jane Fonda), her cameraman Richard (Douglas) and soundman Hector (Daniel Valdez). All three are invited to cover the Ventana Nuclear Power Plant. They witness an emergency shutdown known as a SCRAM and become concerned that they almost witnessed a total meltdown. Much of the film’s breathless 122-minutes involve Kimberly and Richard butting heads with their network and, later, the heads of the Ventana plant to prove what they saw, while becoming concerned that someone might kill them to shut them up. 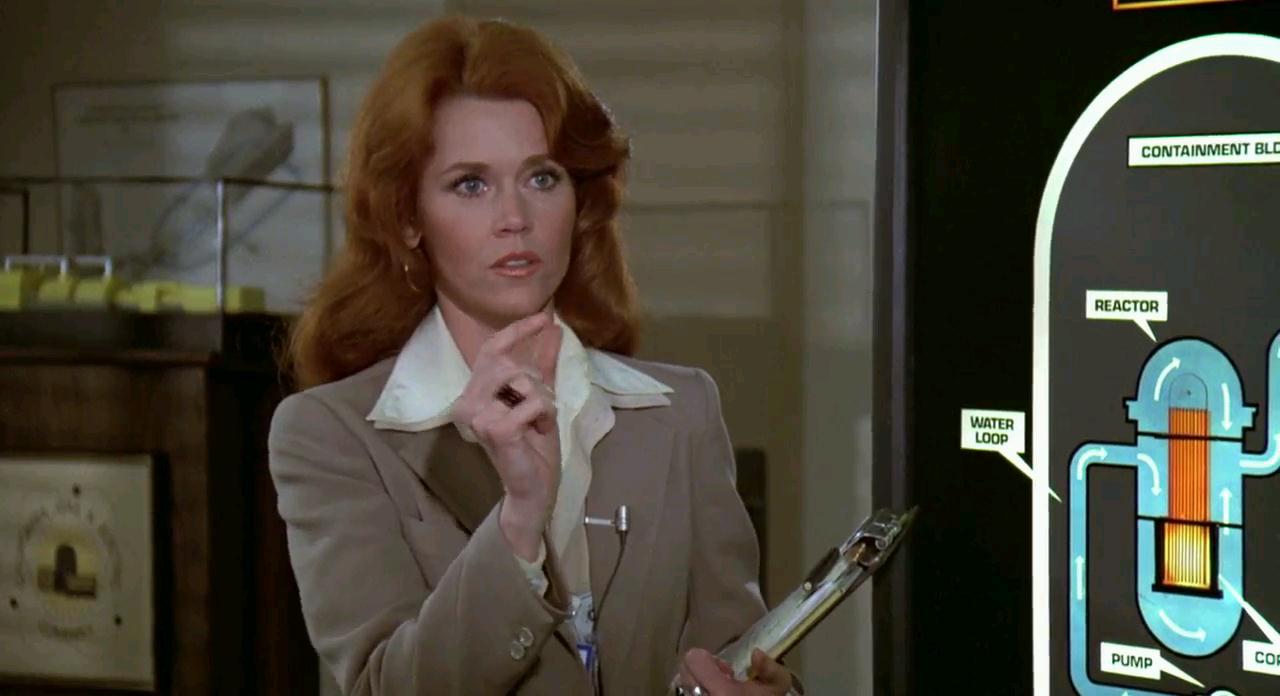 James Bridges, director and co-writer of the script along with Mike Gray and T.S. Cook, plots a deft course. Acting as an apertif to the nuclear power disaster is the uphill battle Kimberly has to make as a woman in media. Our first introduction to her is while she reports a puff piece. The backstage crew producing the film comment on her appearance and recommend zooming in tighter on parts of her body. Her decision to cover the Ventana plant is in the hopes of being taken seriously, about as serious as the audience should treat nuclear power. Considering Fonda herself was still reviled as “Hanoi Jane,” Kimberly Wells almost acts as a mea culpa to audiences, a grand declaration from the actress that her points are valid and should be legitimized. And the other characters are immune from perpetuating their own dominance over Kimberly. Douglas’ Richard, whose devil may care attitude and magnificent head of hair denote his ladies man persona, is more than willing to engage in a little workplace sexual harassment by slapping Kimberly, or “Kimbo” as he calls her, on the backside. What Bridges and crew do, though, that ultimately helps negate these flaws is how everyone unifies to stop a common threat. Richard’s ignorance pales in comparison to what Kimberly is uncovering.

Bridges knows how to create tension and The China Syndrome is easily the tensest movie I’ve watched in ages. Starting with the arrival at Ventana, Kimberly and crew are given the standard tour, boring and inconsequential. Like with all disaster movies once someone says “What was that” it’s all downhill from there. The original SCRAM event is a master class in suspense as the camera focuses on the events happening in the control room and cuts to Richard silently filming it all. Bridges’ camera silently glides in to film Richard’s camera illicitly filming the event, filming the filming.

But no matter how dogged the reporters pursuit The China Syndrome is all about Jack Lemmon as shift supervisor Jack Godell. I love Dustin Hoffman in Kramer vs. Kramer, but good Lord Jack Lemmon deserved the Oscar for this! His Jack Godell is the Cassandra figure of this movie, telling people that something is wrong and being rebuffed at every turn. Had he been a bit more ambiguous I could see the film playing him up as a Howard Beal-esque figure. When the SCRAM happens in the beginning it’s a masterpiece of reacting. The sweat on Lemmon’s brow builds, his hands tremble. Is it a piece of acting or is he really afraid? The fact that you can’t distinguish it shows what perfect stage business it is. Lemmon’s tragic as the man desperate to save live but butting up against corporate bureaucracy. His moments with Wilford Brimley are the best. Brimely’s Ted Spindler fears being made the scapegoat for what happened at the plant because it’s “tradition.”

To dive deeper into the plot is to prematurely reveal the power of the story and, honestly, I feel I’m underselling this. The China Syndrome is a film that gnaws at your brain long after you’ve watched it. Tense, frightening and still boasting an impact on our lives today…..did I mention Jack Lemmon should have the Oscar for this?